The thought of losing a car keys send chills down any car owner’s spine. And, as bad as it sounds, it seems to happens all to often. For this reason, Infiniti has come up with various key types to ensure your security when such a misfortune happens. Let’s take a quick peek into the different types of Infiniti car keys: 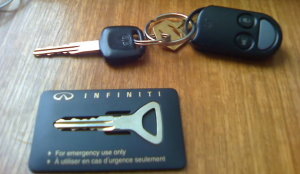 A basic car key was the most common used type of car key up until the mid-to late-1990’s. Although it has a unique cut, the basic car key lacks a security feature. With cuts and grooves on the shank, it looks like a house key. Basic keys are the simplest and easiest to copy as they do not require any special machine besides the usual one a locksmith uses to cut other keys. 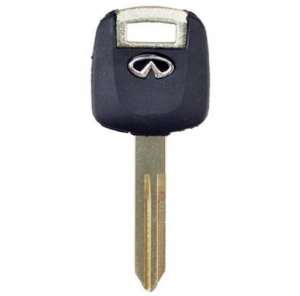 The shank of a laser cut key is slightly thicker, with not too many carved-out grooves. Because of the distinctive winding cut on the shank, laser cut keys are often referred to as sidewinder keys.

These keys are slightly expensive because they require more sophisticated machines to cut them – not the ordinary standard key cutting machine.

Laser-cut keys’ built-in transponder chips need to be programmed by a locksmith or dealership. Considering their costly nature, these keys are only replaceable by these two.

Switchblade keys can have a laser cut or a basic cut.Switchblade keys beat other types of car keys in that its components can be purchased separately.For example, if your key is damaged and cannot function, you can buy the shank separately. Losing your infinite switchblade key will mean that you buy both the key and the fob into which it folds.

In the traditional sense, smart keys are not keys. They are fobs that allow the driver to turn the vehicle on and off with only the press of a button. These fobs can either stay in your pocket or be inserted in the dash.

As a result of advanced technology, A smart key has the ability to use rolling security codes. This hi-tech system randomizes the correct code, thus preventing thieves from hacking your car through the use of a code grabber.

Your infinite smart key emits a code that the car computer recognizes and verifies before starting the engine. Nearly all car brands have smart keys bundled in their high-tech packages. It is important to know that only dealers can replace smart keys.

With the knowledge of the types of car keys available on the market, you can make an informed choice on the kind of car you would like to purchase.